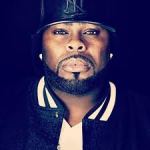 Dominick Wickliffe, better known by his stage name Crooked I, is an American rapper from Long Beach, California. He is a member of the hip hop supergroup, Slaughterhouse with other members Joe Budden, Joell Ortiz and Royce da 5’9″. Slaughterhouse is currently signed to Shady Records. Crooked I has the best of both worlds of being signed to a major label Shady Records (Slaughterhouse) and also being an independent artist. Crooked I is currently CEO of his own record labels, Dynasty Entertainment and C.O.B. Digital as well as Senior Vice President of Treacherous Records. Before starting his own label, he was also signed to Virgin Records and Death Row Records.

Around the age of seventeen, Crooked I started an independent record company called Muscle Records with professional football players also from Long Beach, Chucky Miller and Leonard Russell. It’s not known how many songs were recorded, and the music recorded during this period still remains unreleased. This is when he caught the attention of Noo Trybe/Virgin Records, and landed his first record deal in 1995.

Crooked I originally got his start appearing on compilations released by Big C-Style’s record label, 19th Street Records, such as 19th Street LBC Compilation and Straight Outta Cali. He also appeared on the soundtracks to movies such as Ride and Caught Up, where he collaborated with Snoop Doggy Dogg, Tha Eastsidaz, and The Luniz. At the time, Crooked I was still signed under Noo Trybe/Virgin Records, who handled distribution for 19th Street Records. Business was going good, but for unknown reasons, Virgin Records decided to get rid of their urban division, otherwise known as Noo Trybe, and Crooked I was out of a record deal.

Wickliffe was later contacted by Big C-Style and Daz Dillinger to form DPG Records, which was originally going to be a sub-label under Death Row Records at the time. Crooked was going to be 20% owner of the label, and the first act released as well. Daz left Death Row Records to run DPG Records independently, but rather than go with Daz, Crooked was trying to figure out his options.

Crooked I also had talks of signing to Dr. Dre’s Aftermath imprint, but Dre wanted to release Chronic 2001 and Eminem’s Marshall Mathers LP before releasing Crooked. He also had talks with other major record labels who wanted to sign him, but they too were waiting for Dr. Dre’s Chronic 2001 album to be released before they would consider signing another West Coast MC. It was around this time that Crooked I re-negotiated the original deal he had with DPG Records/Death Row Records as a solo artist deal with just Death Row Records.

While on Death Row, Crooked I appeared on a number of compilations, such as Too Gangsta For Radio and Dysfunktional Family, and appeared on various releases, such as Tha Dogg Pound’s 2002, Ja Rule’s The Last Temptation, and 2Pac’s Nu-Mixx Klazzics. He also recorded two albums, Untouchable and Say Hi To The Bad Guy, both of which were unreleased due to various label issues and industry politics. He did manage to release a mixtape along with Death Row’s then in-house producer, Darren Vegas, called Westcoasanostra Vol. 1 in the Spring of 2003.

The Start of a New Dynasty

By 2004, Crooked I’s album had not been released, Suge Knight was constantly in and out of jail, and Crooked I’s contract had expired by November 2003. He left Death Row in early 2004 to start his own label, Dynasty Entertainment. It was not long after that when Crooked I signed a distribution deal with Treacherous Records/Universal, but more legal trouble from Death Row surfaced, and Crooked I had to stop production for his then titled album, Mama’s Boy, which was actually going to be the name of Crooked’s second release under Death Row Records. Later on the title of the album changed to Mama’s Boy Got a Loaded Gun. In the meantime, Crooked I released the online mixtape, Young Boss Vol. 1 through his official website. The mixtape received critical acclaim throughout the underground Hip-Hop circuit, garnering an impressive “XL” rating by the Hip-Hop publication, XXL Magazine.

After the legal matters settled, Crooked began recording again, and prepping the release of his documentary Life After Death Row. He appeared on compilations such as Yukmouth’s United Ghettos of America Vol. 2, Sway & King Tech’s Back 2 Basics, and on fellow Treacherous Records label mate K. Young’s debut album, Learn How To Love. In 2005, the name of Crooked’s debut album changed to Boss Music, and he created a buzz with the song, “Boom Boom Clap” in the summer of 2005. He also recorded two songs with producer Scott Storch, “Cali Boyz” and “You’re So Bad”.In 2006, he released his heavily anticipated mixtape, Young Boss Vol. 2 hosted by DJ Skee, and his DVD, Life After Death Row, followed later that Fall.Currently, Crooked I has a weekly radio show on Wednesday evenings on DJ Skee Radio.

Joe Budden reached out to Crooked I, Royce da 5’9″, Joell Ortiz, and Nino Bless for a track titled “Slaughterhouse” on his digital release, Halfway House. Based on the reception of the track, they decided to form a super-group, minus Nino Bless, and named it after this song. They released numerous songs throughout early 2009, building a buzz for their self-titled album, which was released through E1 on August 11, 2009. The album featured production from Alchemist, DJ Khalil, Mr. Porter, Streetrunner, and guest appearances from Pharoahe Monch, K. Young, and The New Royales. 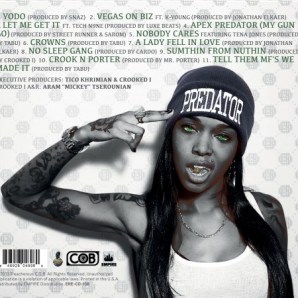 California native wordsmith, CROOKED I recently dropped off his new album, Apex Predator. Crooked I shares his dope, insightful take on life in the hood, the streets, and the things that go down in day to day life.

Crooked I’ newest album APEX PREDATOR is definitely what his fans have been waiting for.

Video for YODO off the new album APEX PREDATOR:

There was an error retrieving images from Instagram. An attempt will be remade in a few minutes.