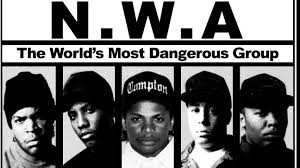 The story about the boys from the hood is close to air nationwide, this movie about their life and how they made it being straight outta COMPTON, CA should be able to take their viewers in a crazy rollercoaster ride.

Eazy E, Dr. Dre, Ice Cube, Mc Ren and DJ Yella’s songs told it how it is for a young black man from Compton, their songs weren’t about how to make things better or how to teach people about corruption, they just mentioned what the struggle is like to live in a place like Compton. I expect the movie to tell it like it is and not hold anything back. They were raw, and unapologetic, some of the most talented gangster rappers that lead the way for so many people indulged in this culture.

It’s funny how misinterpreted they were because of their lyrics. It’s saddening how because of stupid politics they broke up, and how fast the world lost Eazy E at a young age. There’s so much to say about a group of kids who just wanted to speak their mind and tell the world what is like to come from Compton. What I expect to watch as a hip-hop head is.

The beginning, and where they are now

All of us have an idea that it was because of Eazy E, that the group began to produce lyrics. Dre and Ice Cube both wrote for this bad ass that sadly ended up dying very soon. A lot happened in the course of a decade for these guys. We think we know but we really have no idea… Some of the questions that Internet doesn’t fully provide fans is how did they get together, who met who and why did they name themselves NWA?

Out the five, the most known to go on and make something bigger than NWA is Ice Cube and Dre. Their life styles have really proven to kids from Compton that people can make some thing of themselves if they follow their dreams. But following your dreams is just key term. These guys have worked really hard. Dre met Eminem and helped him make a career and made tons of money. What set him apart is his latest endeavor when he became a part of is Dr. Dre beats. The product started off by being headphones and is now a “subscription-based streaming service”. Ice Cube on the other hand has stared in many films, for people who are not really aware of what NWA is, they might just confuse him for an actor.

When “fuck tha police” came out the police responded with a statement that has made me believe that they might of forgot what the 1st amendment right means. They accused them of encouraging violence and teaching others how to be disrespectful. NWA’s lyrics mention CORRUPTED cops, not just any cops. Again, NWA’s lyric prove how they spoke from experience and not made anything up. From what I can see from the trailer of the movie is that they will mention the controversy between the FBI and NWA, I hope I get to see more details.

He mentions “Studio Gangsters” which is a person who claims is from the hood but they don’t come from the hood. They rap about where they come from, they claim they have been to jail and have done things that give them street cred. But in Eazy E’s eyes, if they are not “original” he labels some people as fakes. In this interview he calls out Snoop, Dre, and others. If Eazy were still around he would be cringing to witness that todays rappers are mostly “studio gangsters”. People who are not from the hood, nor they know what it really means to be from the hood, have gained somewhat of fame because of other writers who are paid to write for them. There has been a shift in rap and what it originated from. Yes, drugs and alcohol has always been mentioned. But what made rap, is to spit what a day in the life of a person who needs to be heard is like.

What do you want to see from Straight outta Compton? Share your thoughts with us and let us know if you are as excited as us to watch this movie.